From the Good Ship R. Tucker Thompson, secure in Mansion House Bay, Kawau Island. From arriving after 2000 (8pm) last night we tidied ship and before settling down the Trainees had a game of hide and seek well into the early night. A little energy release after a long day of sailing. The morning was a slow affair until the swim was over, showered on deck and duties out of the way for breakfast, into the routine. The plan was a morning hike over to the olde Copper Mine chimney stack and return with the head runners and stragglers arriving back to the ship for lunch and some chill time. Tumanako went aloft to complete the Tucker Challenge in short time.

The shore visit had found a well established barbeque set up and the train of thought to have a bbq ashore for a picnic dinner and sport activities with Frisbee and a rugby ball. The resident peacocks were an added attraction as they scattered about fleeing from the crazy sports. The hotplate sizzled with sausages and chops, prepared salad and coleslaw with compulsory bread and butter trimmings had everyone around the table. The Govenors house added a touch of ambience to the scene, kukupa frequented the Morton Bay Fig, weka ran about. It was a pretty chilled way to end the day. As darkness approached the Tucker Tender returned everyone safe aboard for some class and sing song rehearsal for Saturday. The agreed to plan is to now awake before dawn and set sail for another day passaging up the coast towards Whangarei. Will be aliitle while before we settle down again and no doubt the trainees have some more antics before bunk time and some serious chainsawing of forests reverberate through the ship. Pleasant times ahead. 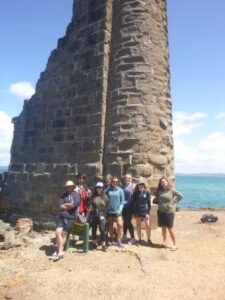