Once leaving the wharf today, with the foresail already up and the trainees getting to know each other we played the name game. Following that, the trainees headed down stairs to unpack their bags while waiting for lunch.

After our beautiful lunch of macaroni and cheese the trainees completed their orientation before having a lesson on climbing aloft. We continued to hoist the mainsail and headsails on the voyage towards our anchorage. Once we arrived in Army bay on Moturua Island we dropped the sails, anchor and launched the tender, the trainees were straight into the water with Lyndon and Hunter’s hands glued to the rope swing… After finally talking them into coming to the island, they swam to shore, along with the company of Zalina.

On arrival we took the trainees up to the islands army bunker to enjoy the beautiful views the Bay of Islands has to offer us. Once we got back to the beach we played a few games such as pass the rakau stick with no hands and Helium stick we headed back for the tucker, the swimmers swam back to the ship with Hemana joining the group. On the Tucker we hoisted the tender and anchor and headed towards our night anchorage in Pipi Bay.

Once we arrived we had some eager trainees that wanted to complete the tucker challenge, Hemana was first up followed shortly by Ruby, JJ and Zalina. Many trainees got very high up but thought they’d save the challenge for another day. We had an amazing dinner of cottage pie before having a few short lessons in the saloon. Now the trainees are bonding and a lot of laughter is left echoing throughout the bay.. 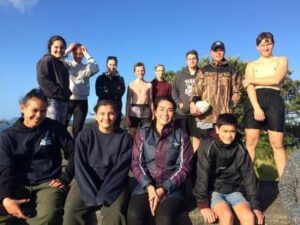