Ahoj friends and family of the R. Tucker!

Today we started off with another classic morning swim, Quintin being the first in the water.  Then it was time again to polish the brass, sweep and mop, clean the head and scrub the decks. Chores out of the way, breakfast was munched to fuel us all up for another glorious day in the Bay.

Then we hoisted the anchor, Guy doing a b-e-a-utiful flake of the chain, and we were off towards Mangahawea. On the way over trainees competed in a line chase- with Paris leading the port team to the win, well done!

Once the anchor was dropped, Lil Tuck was put in the water and Hemi and Ezra attempted a row around the bay, semi successfully. Meanwhile Aadyn attempted, and completed, the Tucker challenge, earning him a turks head anklet. Then Paris, Tylah, Elliott, Hemi and Ezra went for a snorkel looking for kina and other delectable seafood to eat. Guy and Quintin swam to shore and built a life raft of sorts, aided by Chloe and Kristin.

After lunch, everyone went ashore for a walk around the island, Aadyn spotting out a seal lazing in the sun on the beach. On the first hill we did our ‘30 minutes of silence’ for everyone to get a chance listen to, and maybe see, the native birds re-introduced to the island.

After making it around the island, everyone was ferried back to the ship, Paris, Tylah, Hemi, Aadyn and Ezra took another opportunity for a dip in the ocean while Guy, Quintin, Alyndrea and Kristin helped peel some veges for our dinner tonight.

Now we are hoisting anchor again and heading over to Pipi bay, our night anchorage. 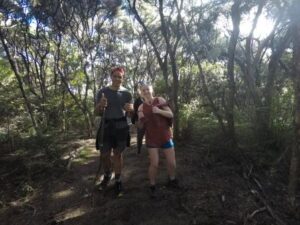