Ahoj friends and family of the Tucker

Today has been another banger of a day in the bay and beyond!

We woke up with the sun again this morning, Paige being the first trainee in the water even jumping in without the ladder down. Then trainees went about their morning chores before a big brekky with leftover boil up, yum!

After breakfast dishes, we hoisted the anchor and headed off to Roberton Island to swim in the lagoon and walk up to the lookout. Croatia and Moata went snorkelling in the lagoons and met some stingrays while Nathaniel jumped off some rocks for a swim. Rachel, Douglas, Kayla, Tayla, Jacob, Gregory, Skye, Paige and Jesse went up to the lookout spot on top of the hill.

Back on the ship again, we hoisted the anchor and began our journey out of the bay and down the coast. The mainsail, foresail and both headsails were both hoisted with some excellent teamwork from everyone. With cooking lunch smells wafting around the ship, trainees learnt how to tie knots and do some basic navigation to steer us in the right direction down the coast.

Lunch was had on deck in the sunshine with the sails up and some friendly resident dolphins providing company and entertainment. Next stop was at the famous Hole in The Rock where everyone went through on the dingy, still accompanied by the dolphins!

Then we sailed down the coast for a couple of hours with Kayla and Croatia making a brownie in the meantime, Moata, Nathaniel and Skye sitting out on the bowsprit, Tayla taking the helm, Douglas climbing the shrouds and everyone else playing cards and music.

Once we arrived at our destination, the beautiful Mimiwhangata, we dropped anchor and went ashore for our 30 minutes of silence, played some games and climbed some trees. With the sun going down, we made our way back to the ship to move to our night anchorage at Ngahau.

Now we are waiting for dinner with tinging nostrils, smells good! 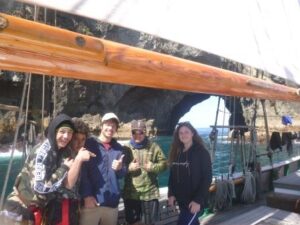