Ahoj  from the Good Ship R.Tucker Thompson, at anchor tonight in Paradise Bay. Nearing the end of our adventure but with still one whole day left to fill in the gaps. Has been a day, better than it started off with overcast,  low cloud taking from view the hills around us. 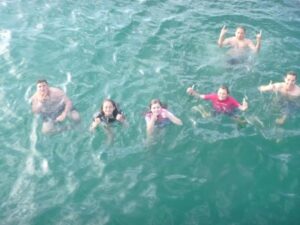 The morning swim we lucked with the sun and calm, then duties to get Tucker ready for the day, sitting at anchor contemplating class, when the breeze rose enough for us to head out. Firstly the main hoisted, then the anchor and foresail together, standing by on the headsails we headed out through Albert Passage leaving Hope Reef to starboard and the spectacular cliffs of Urupukapuka to port. The Course was the next sail and as it filled we headed out into the Pacific Ocean. The Cape Brett Peninsula was astern. Kian, Pera, Jovan, Moritz, Kendal, Grace and Evan went aloft, Reubyn and M.K. enjoyed the ride from the bowsprit. Erina and Damin settled into the rhythm on the deck.A fresh easterly kept us on a course bound for nowhere, when we spotted a Mollymawk gliding the wave tops. While we kept site of her white wings , she disappeared amongst the horizon cloud and we turned ours back towards the bay.

Lowering sails under the lee of Okahu we carried into Paradise bay for some lunch and shore relief. Trainees out to the nearby pa for some plant pest control and beach games. Back on board the swing was out for a much enjoyed swim, swing,  manu session. In the calm of the bay, with not much time left, Jovan, Damin and Evan tackled the Tucker challenge. Evan having been up and down a few times ran out of his own excuses, stretching out to touch the yard. Much applause from fellow trainees and crew for a great effort. The day will conclude with the usual chatter about the table, the predictable game of cards, the daily log filled out, bunk lights out, eyes and mouths close, much like a navigational beacon flashing, intermittent then quiet. Until the morning.