Ahoj from the Good Ship R.Tucker Thompson, the first full day behind of industrious and indefatigable activities. The morning swim awaiting the rising sun with the warm deck shower easing up on some of the surprise of the plunge. Then duties of cleaning the ship above and below deck as breakfast cooked and served, Dishes then some line handling took place introducing the trainees to “take a turn”, ”make fast”,  “coil down” with a “sweat and tail” at the end. By then we had arrived at Motuarohia for a morning of lagoon snorkelling, lookout climbing and beach combing for plastic.

Returning for lunch and setting some sails we sailed the inner islands to Waewaetorea for some games ashore, including the 30 minute silence giving the trainees a chance to think about the surroundings and may 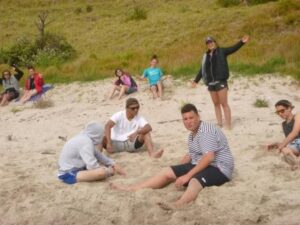 be what their friends were up to, then back onboard for some more sail hoisting, climbing the rigging and bowsprit enjoying the freedom of the ship.  Pera was first aloft, followed by Grace, Kian, Moritz, Jovan, Erina with Evan, Kendal taking turns on the helm and Reubyn testing out the bowsprit, Damin and M.K. chilling up forward.

Circumnavigating Moturua we found ourselves approaching the calm  entrance to Pipi Bay on the southern shores, shelter from the northeasterly and a reknown spot for kiwi listening, later tonight. The ship is quiet with some class work going on awaiting a beautiful dinner of meat and vegetables.