This morning the Whangarei girls team were first in the water and swimming around the ship.. Shortly followed by Kaitaia College. The morning duties were completed and Shanae and Alissa were first ready for below deck duties and Cailee and Hunter were the first team ready for above deck duties. At 8am we received a phone call from More FM radio where Captain Wayne completed an on air interview. He talked about the process of the Tai Tokerau challenge and what we do here aboard the youth trips. It was then time for a delicious breakfast that everyone devoured.
At 8:30 some of the crew had to run to the shops as some trainees had forgotten their tooth brushes and hair brushes.
Back on the ship some of the trainees sat through an engine check while others got ready on the anchor.
It was then time for us to set a course for a different anchorage further up north. Along the way we completed a class of line handling before the girls faces went a tad pale due to the moderate swells.
They took a seat at the back behind the helm and began some light classes on knots.
It took about 4 hours to get from Tutukaka to our new anchorage in Admirals Bay in Whangaruru.
Along the way we enjoyed a delicious soup and scone meal.
We dropped the anchor and launched the tender and headed straight to the beach so the girls could stretch their legs and relieve their sore tummies.
We completed the local loop track which most of the trainees enjoyed. Back on the beach we played the human knot game, Pass the rakau, Helium stick and the seagull game.
Back on the ship Aura, Kara, Shanae and Alissa enjoyed a nice fresh dip after the hot walk.
Dinner is now being prepared while the Whangarei girls’ team is first up for the Baking competition tonight. Every night will be a different team.
Unfortunately due to the swell and most of the trainees not feeling too well we haven’t been able to complete many challenges so far. The plan is to get back in the bay tomorrow so we can focus all of our attention on the challenge at hand. Although despite the un-favourable sea conditions the morale and competitiveness is still rather high on board.

Hope you all have a good night! 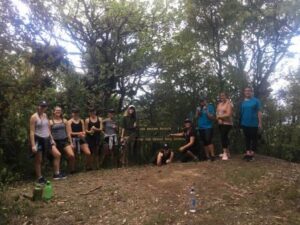