From The Good Ship R.Tucker Thompson, anchored in the calm of Pipi Bay, Ipipiri, back in the Bay. After all the wind from yesterday we woke to a calm swim and shower. Trainees enjoying the quick dip and warm shower to refresh. Breakfast and dishes then underway, fishing lines prepared, Honey on the hand line, Te Aroha on the helm. Robin was soon aloft joined by Matthew, then Isla sitting up on the crosstrees as the gentle ocean swell welcomed us into the Pacific Ocean. Alayna and Petra after assisting with some baggy wrinkle making then harnessed up for climbing, Ardina and  Te Rerenga already in his favourite spot on the ratboard.  Piripi, Annay, and Pohatu out on the bowsprit. The distant Piercy Island, named by Lieutenant James Cook, on account of the hole through it, after one of his sponsors Admiral Brett Piercy, was soon rounded and the entrance to the serene protection of the islands had us at anchor in Ururpukapuka Bay. Lunch, bathed in sunshine the Tucker Challenge was next on the list. Isla was quick off the mark with dishes still being done, next Honey then Matthew was up, leaving his teatowel on the benchtop,  reached out for his Turkshead. Petra on starboard, Te Rerenga on port completed  theirs. Alayna taking her time building confidence and getting encouragement from fellow trainees steps out and eases her way out to the end. Adina who began then came back down went back up for a second attempt and completed the challenge. Pohatu spent some time on the crosstrees observing then decided tomorrow will be a better day. Shore time for some games of kete then a short hike for some views. Back on board for a swim and good times, swing and laughter then tidy up time across the deck as we raised the anchor for our overnighter with promise of an oarsome sunrise swim. The table in the saloon is surrounded with cards slapping and more laughter. Busy day tomorrow with wind for sailing in flat water in the forecast. 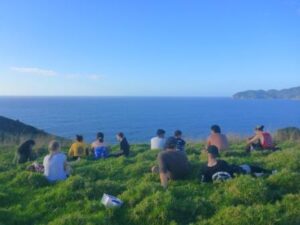